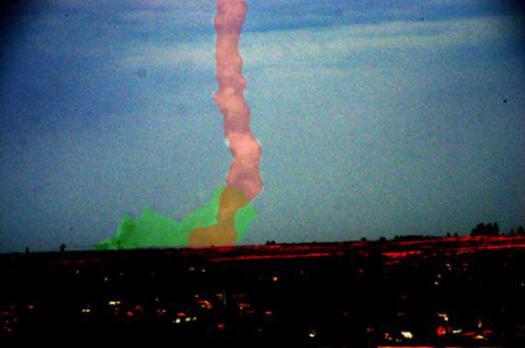 More than a year has passed since Malaysian flight MH17 crashed, but we are still waiting for the publication of “overwhelming evidence” of Russian culpability.

The only ‘visual proof’ a Buk missile was fired from rebel controlled territory is a photo posted by an anonymous Twitter account three hours after the crash. I wrote a lot about this photo, for example here and here. There’s an ongoing debate on a Russian language forum too.

Crash site smoke, but where is the Buk plume? 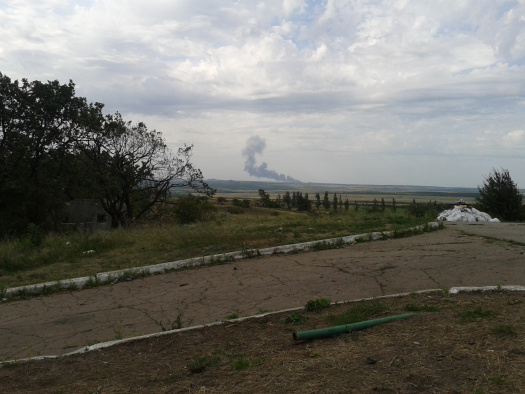 This photo has not been posted on the internet before and is interesting for a couple of reasons:

1) Position from where the photo was made: Saur Mogila
2) Photo made by anonymous rebel 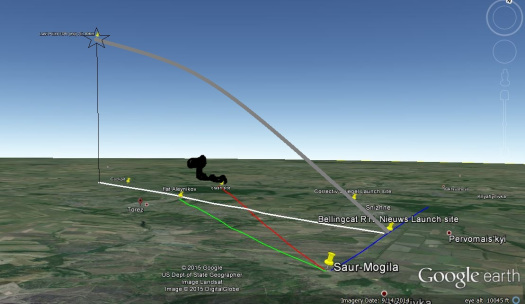 3) The proximity of the position to the ‘Buk launch site’ 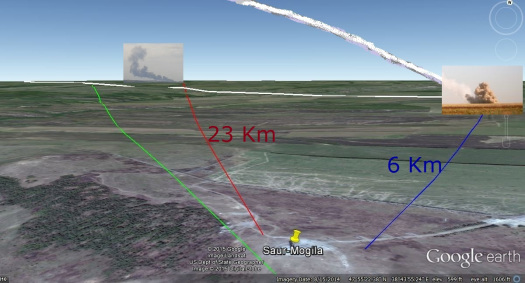 4) Saur Mogila is the highest point of Donbass with an excellent view over the entire region. The Grabovo crash site plume 23 kilometers away is clearly visible on the photo. Traces of a Buk plume at a distance of just 6 kilometers should still be visible at 4:28pm if the plume on the ‘Buk smoke’ image ever existed and was clearly visible moments earlier. 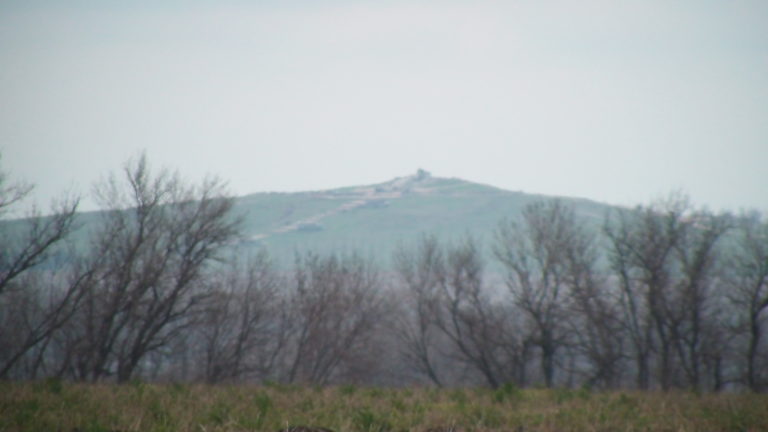 How does a plume go up in ‘smoke’? 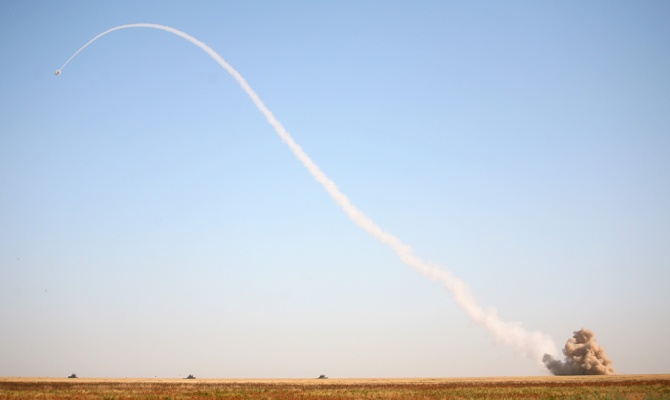 The plume of a Buk missile just after it’s launched has a diameter of about ten meters. The cross section of this plume covers π52 = 78.5 m2 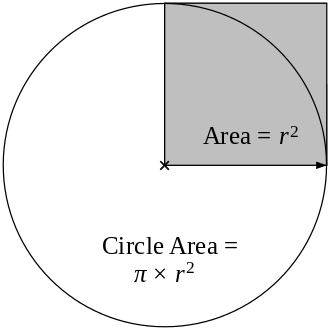 The area of a circle with radius πr2

With the ‘launch site’ >12 kilometers away from the photographer the smoke plume on the photo in reality must have had a diameter of one hundred meters.
If minutes after the launch the diameter really grew to 100 meters the cross section of the plume would have become π502 = 7,850 m2. The density of the smoke would be reduced to only 1% of its original and the remaining haze wouldn’t be recognizable as a clear smoke plume anymore.

If we look closely at the point of the horizon where this plume starts, we notice it is exactly at the same spot as in the Buk plume photo. Only wind speed and direction where different on July 17th 2014 and June 7th 2015.

In total Yana took 10 photos showing the plume. Photos were taken from a 6th floor balcony in the same building as the ‘Buk plume’ photo (taken from the 9th floor).

Yana was so kind to give me a video too:

Where does the smoke really come from?

The distance between the photographer and the smoke plume has been calculated by Michael Kobs and established at approximately 4,600 meters. (source: 5.8Mb PDF-file page 67 onwards can be downloaded here) 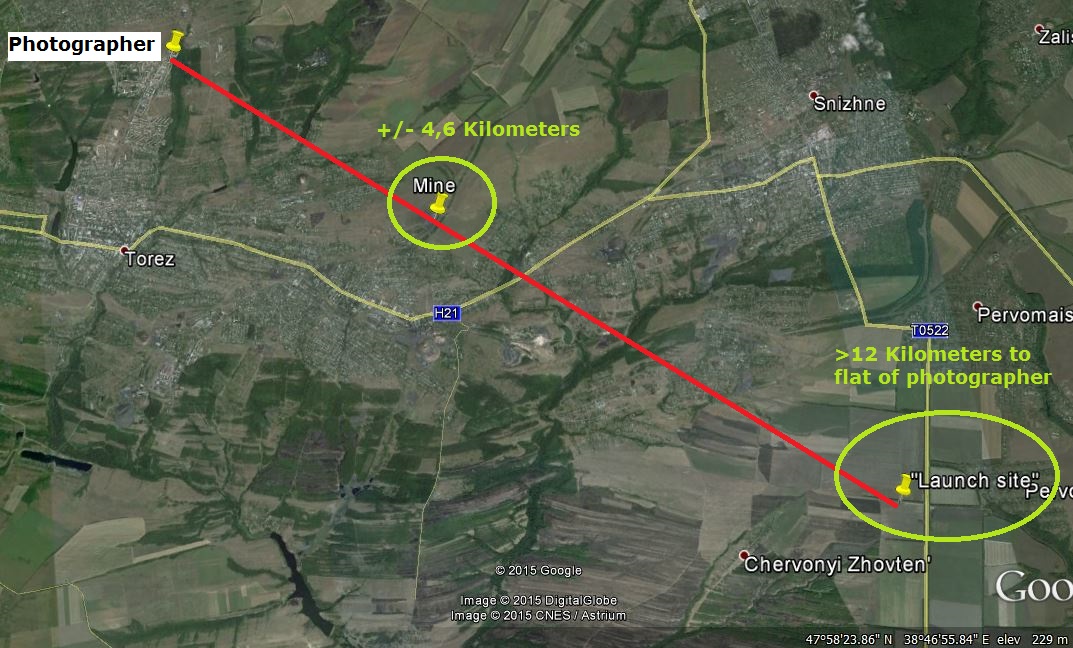 Following the line of sight from the photographer to the claimed launch site twelve kilometers South East we find a few candidates:

There’s a coal mine or stash at around 4,6 kilometers. 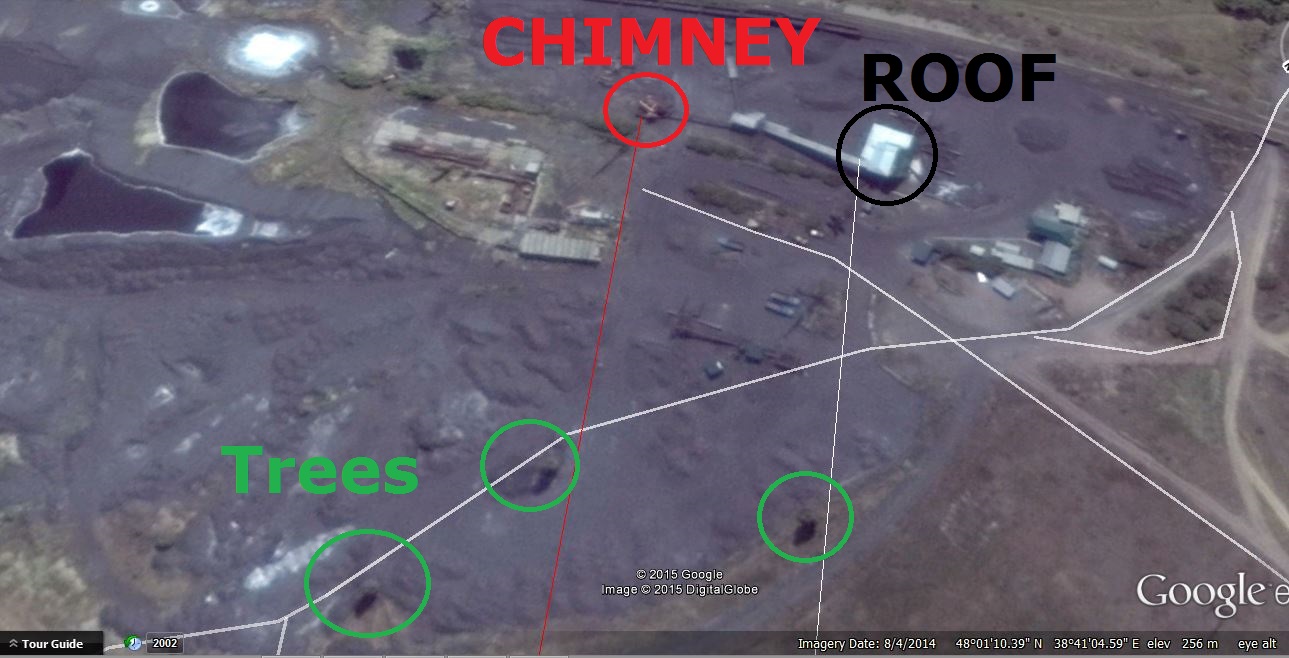 There’s a chimney in the line of sight of the photographer, not visible on the photos, because it’s just below the visible horizon (due to the elevation in the landscape closer to the photographer). Is this chimney the source of the smoke?

A photo taken from another perspective shows the chimney (c1), the building with the roof and the 3 trees (T1,2,3) 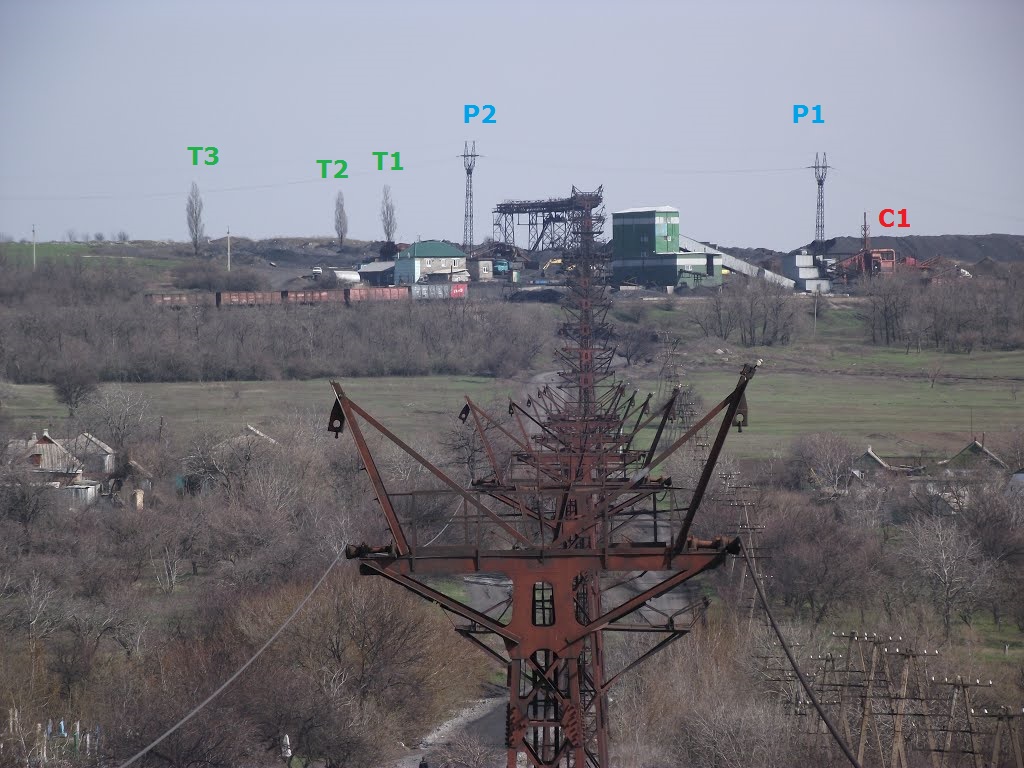 Could a train as in the photo cause the smoke? Others suggested the most likely source of the smoke is Voskresenskaya mine about 5,5 kilometers from the photographers point of view. 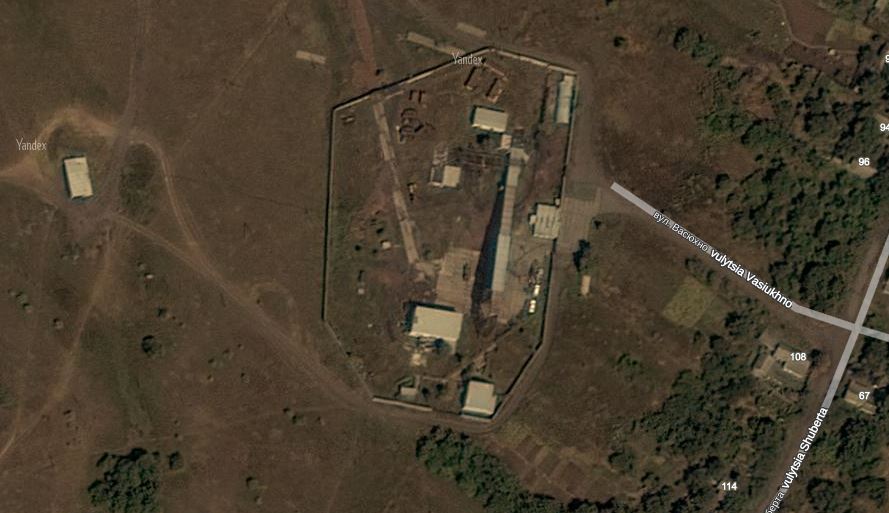 Maybe in the vicinity there are other possible sources? Hopefully local people will come up with more information so the exact source of the smoke can be determined with absolute certainty.

Correct!v claims to have found the real Buk launch spot

Both award winning Correct!v and Bellingcat claim to have located the real Buk launch site. Provided no new story is disseminated claiming two Buk missiles have been fired, the distance of more than nine kilometers between their locations is a strange anomaly. Neither Correct!v nor Bellingcat have bothered to come up with an explanation. Correct!v’s ‘Flight MH17 – searching for the truth’ can be read here.

Spokesman of the company that produces Buk missile complexes:

Much more detailed information including a link to the entire press briefing here.

Why the ‘Buk smoke plume’ consists of two separate trails? 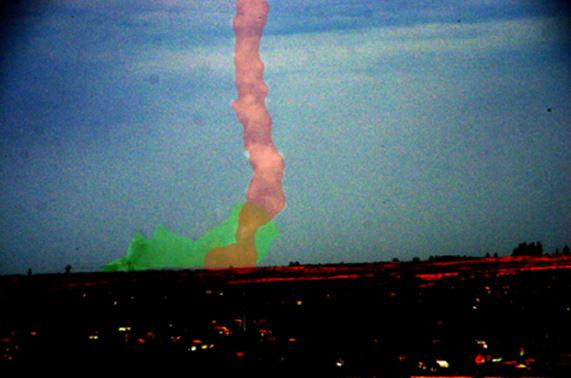 If a missile launch would be the cause of the black smoke (green) the overlapping white smoke (red) must have moved with the wind from the very start.

Dr. Krawetz in a few words destroys Bellingcat’s assessment the photo is not manipulated. Months before forensics expert Charles Wood already exposed many other basic flaws in Bellingcat’s analysis.
About another claim “Russia’s Ministry of Defense manipulated satellite images” Dr. Krawetz comments on the way Bellingcat used the Fotoforensics tool developed by him:

” ‘distances itself’? Understatement. I had nothing to do with their faulty analysis.” (source + read Spiegel)

So, what’s the story of the photographer all about? 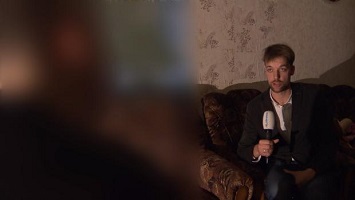 Dutch journo of the year Olaf Koens & the ‘anonymous’ photographer

“I want justice to prevail…..I want….the people…the ones who did this will be punished,” the photographer says.

“First of all let’s be clear about the fact that anything the Ukrainian secret service makes public must be taken with a big pinch of salt. In the past we have been put on the wrong track by the Ukrainians and secondly you have to ask yourself in regard to such happenings as these: who benefits?”

As a news consumer I understand that sometimes it can be necessary to keep the identity of a witness secret, but certainly I want journalists to inform me about the strong pro-Kiev stance of a witness when he incriminates anti-Kiev rebels and Russia while he claims “my only goal is justice”. 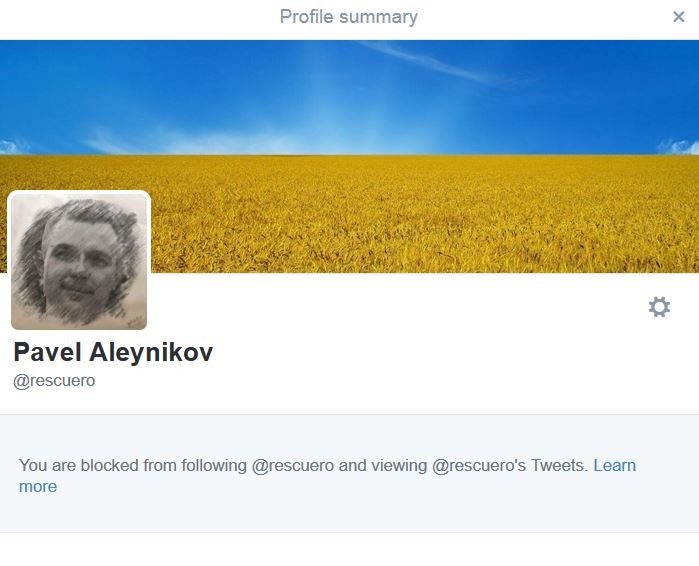 The amount and the gravity of the inconsistencies in the ‘anonymous’ photographer’s statements and the way they are covered up by others will be subject of another article: ‘Buk plume’ burns witness – Part II’

– Prediction: plume photos will not be part of the evidence presented in the Dutch Safety Board final report simply because they are not showing the smoke plume of a Buk missile.

I) Ukraine’s authorities not only present but even produce false evidence and use their position in the ongoing investigations to distort and obstruct an honest search for the truth.

II) Dutch head prosecutor Westerbeke: “There are no indications that Kiev is not absolutely open towards us. They give us all information we want to have” (source). It is deeply troubling that Westerbeke does not inform the public about Kiev supplying falsified information to the largest criminal investigation in Dutch history.

Huge credit for the competent team of legal& forensic experts, engineers and others who constantly help me to collect and evaluate data but wish not to be mentioned in person.