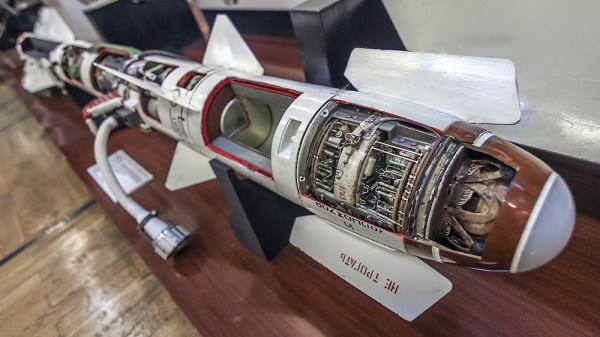 A week ago Almaz-Antey, the manufacturer of Buk, held a press conference. During this very interesting event the engineers of the company explained in detail what is wrong with the Western narratives.
Explicitly not excluded by spokesmen of Almaz Antey: the scenario in which air-to-air missiles fired by fighter jet(s) played a role. 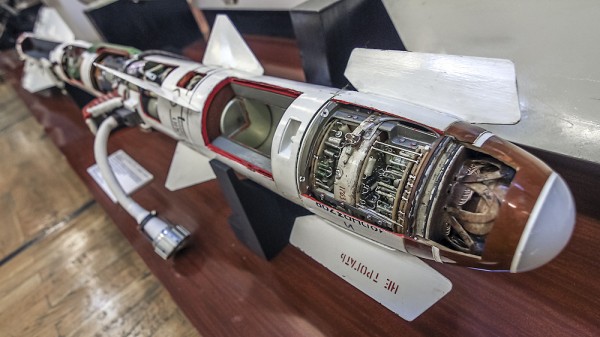 At the same day of the Almaz Antey press conference, the Russian Investigative Committee made the identity of a key witness to the MH17 crash public. (Read about the previous anonymity of this witness in Lying by Omission)

Before fleeing to Russia Evgeny Agapov was a mechanic at air base №A4465 (Nikolaev and Dnepropetrovsk, Ukraine, airfield Aviatorskoe village, about 250 km from the crash site). The witness is a citizen of Ukraine.

Agapov testified that July 17, 2014, three jets went into the air about an hour before MH17 crashed. One of the jets was equipped with two air-to-air missiles type R-60. This particular jet later returned to base without these missiles. The other two jets were shot down. Pilot of the Su-25, captain Vladislav Voloshin, was scared according to Agapov. “It was the wrong plane” (Самолет не тот), Voloshin said as he got out of his plane. Later flight director Dyakiv talked to captain Voloshin. Dyakiv asked: “What happened to the plane?” to which Voloshin replied: “The plane was in the wrong time and the wrong place.” source

These eyewitnesses are residents living in various villages near the crash site. They were interviewed by journalists from Britain, France and the Netherlands. BBC News broadcasted eyewitness accounts of three women saying they saw a fighter jet near Boeing MH17 and heard the sound of an explosion in the sky.

Eyewitness #1: “There were two explosions in the air. And this is how it broke apart. And [the fragments] blew apart like this, to the sides. And when …”

Eyewitness #2: “… And there was another aircraft, a military one, besides it. Everybody saw it.”

Eyewitness #1: “Yes, yes. It was flying under it, because it could be seen. It was proceeding underneath, below the civilian one.”

Eyewitness #3: “There were sounds of an explosion. But they were in the sky. They came from the sky. Then this plane made a sharp turn-around like this. It changed its trajectory and headed in that direction [indicating the direction with her hands].”

Eyewitness #4 at the crash site told «Paris Match», that he saw an aircraft near the Boeing:

“The big one plane (Boeing) I did not see – it dived into the clouds. Bah!. Then an explosion was heard. A strong explosion and debris began to crumble. Here 37 people dropped. The plane, which went with him (Boeing), then went to the front. Then he went “like this” (shows the front hand) – went into the clouds, and a few seconds later there was an explosion. After that at Hrabovo, six kilometers away, a column of smoke rose up to the clouds.”

Eyewitness #5 Lev Bulatov told Dutch blogger Max van der Werff he saw three jets – one of them attacking the Boeing, he saw it and heard two explosions and another one moments later.

“I heard SU’s flying over the surface, hitting Torez and Shakhtersk. And than I saw… The fighter jets were actually three. And later I saw that one jet sharply accelerated in that direction [pointing with his arm] to the north and went up. I saw the silhouette of this rook (fighter jet) with my monocular as I can see my own fingers. And when it accelerated, I heard the roar of turbines and it sharply went up. After some time I heard 3 claps: bah-bah—bah (the last one after some time). The last one after some time. I saw the plane [MH-17] started to crash. But! the central part started falling in that direction [showing with his arm], in the direction of Grabovo. The cockpit was separated, as well as one wing with a turbine and tale. Everything else was intact.” 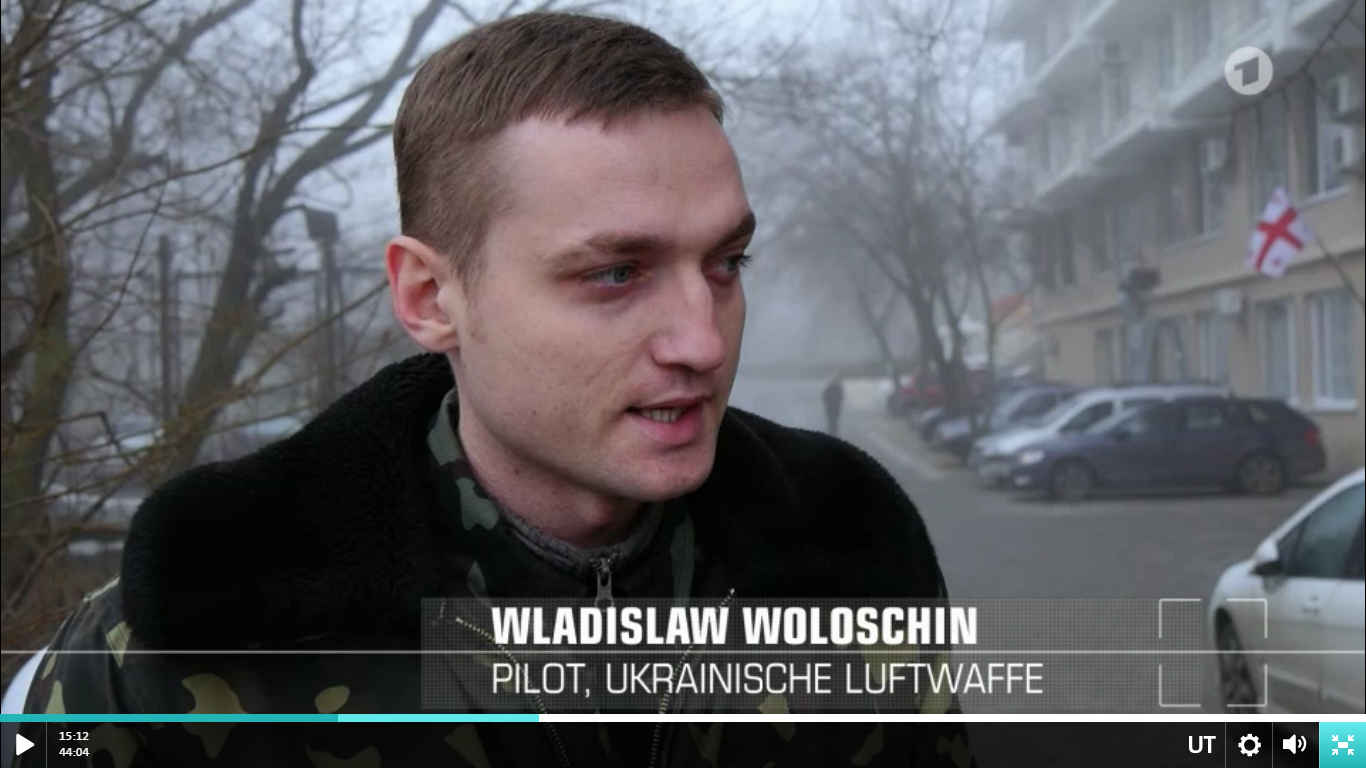 Captain Voloshin told ARD channel, that the events the witness mentions happened July 23, not July 17. But on July 19, two days after the crash of the Malaysian Boeing, Voloshin was awarded the Order of the courage Third Degree. Source 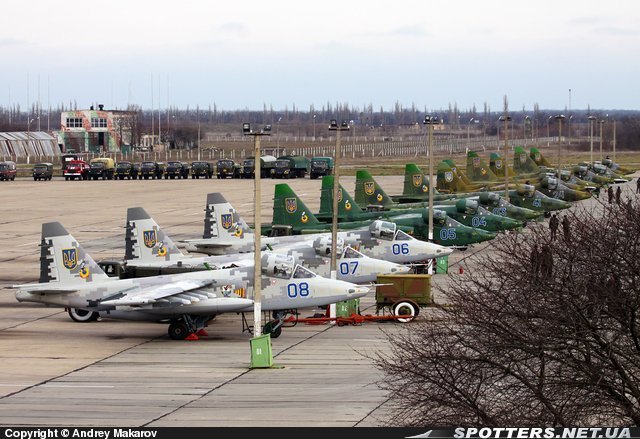 The Sukhoi Su-25 can be equipped with R-60 (AA-8 Aphid) and board cannon GSH-30 or GSH-23. The newest version of the R-60, R-60M (since 1980) was manufactured in Tbilisi (Georgia) until 1990. During the last twenty years the Ukrainian factories «Progress» and «Arsenal» in Kiev have maintained and upgraded these missiles. source 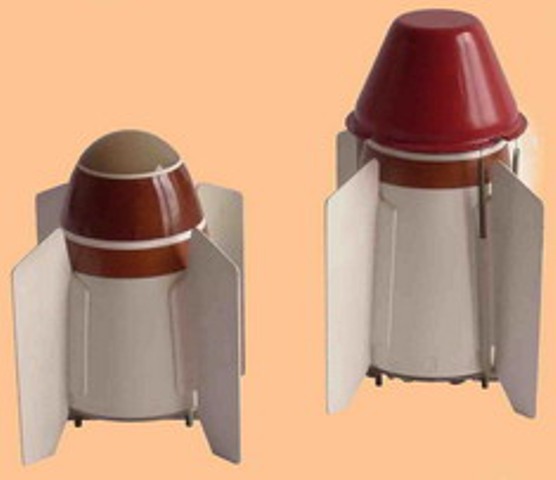 Ukrainian infrared seekers («Komar») from R-60 and R-60M are cooled by liquid nitrogen improving the performance of the missile. Retired members of the Russian and Ukrainian Air Forces write on their forum that R-60 is equipped with ready-made shrapnel elements and wolfram rods (a similar description of the shrapnel and rod-based warhead can be found on other websites). Link 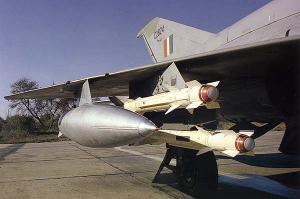 Boeing-747 KAL 902 was shot down April 1978 over USSR air space by one missile R-60 fired from a Sukhoi Su-15. The Boeing lost 4 meters of its left wing. One of the four engines and the fuselage were damaged and the plane decompressed forcing it to lower its altitude from 30,000 ft to 5,000 ft. The Su-15 was at distance 1 km behind and right from Boeing. Link 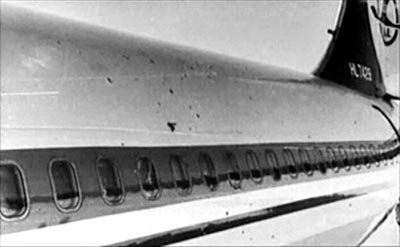 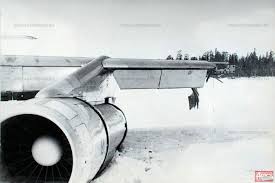 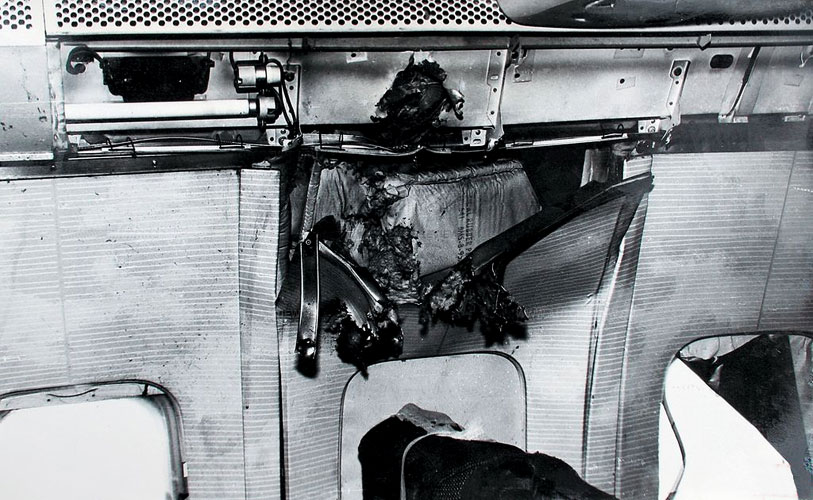 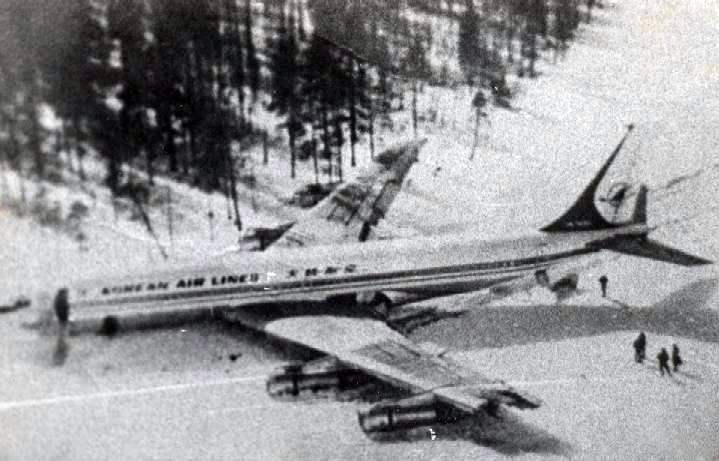 An F-15A of the Israeli Air Force was hit June 9, 1982 over Lebanon by Syrian MiG-21. An R-60 missile damaged the right wing and engine. On the ground it became clear that the right engine nozzle had a hole of one square meter and the horizontal and vertical stabilizers were hit by about 400 pieces of shrapnel. Link

Due to translation issues many English speakers mistakenly believe the warhead of missile R-60 is similar to the Western variant AIM-9 Sidewinder and is of the continuous rod type.

In descriptions of the R-60M it is mentioned that rods and shrapnel are stacked in the warhead. “Solid wolfram elements forming a tight circle that destroy enemy aircraft” Link
Elements are laid out in triangular shape — the pieces probably have triangular section. “The rod-shaped warhead of R-60M (62М) with wolfram elements would result not in linear but rather in huge delta and diamond shaped holes.
Only R-62 and, starting from the 80s, R-62M were exported. 70% of both missiles had shrapnel (or “pseudo-rod based”) rather than continuous rod based warhead. The space between the case and the rod-shaped sub-projectiles is filled with TNT, which has pyramidal holes next to each semi-prepared sub-projectile in the casing. The sub-projectiles weigh 3 g and reach the speed of 7.5km/s” Link 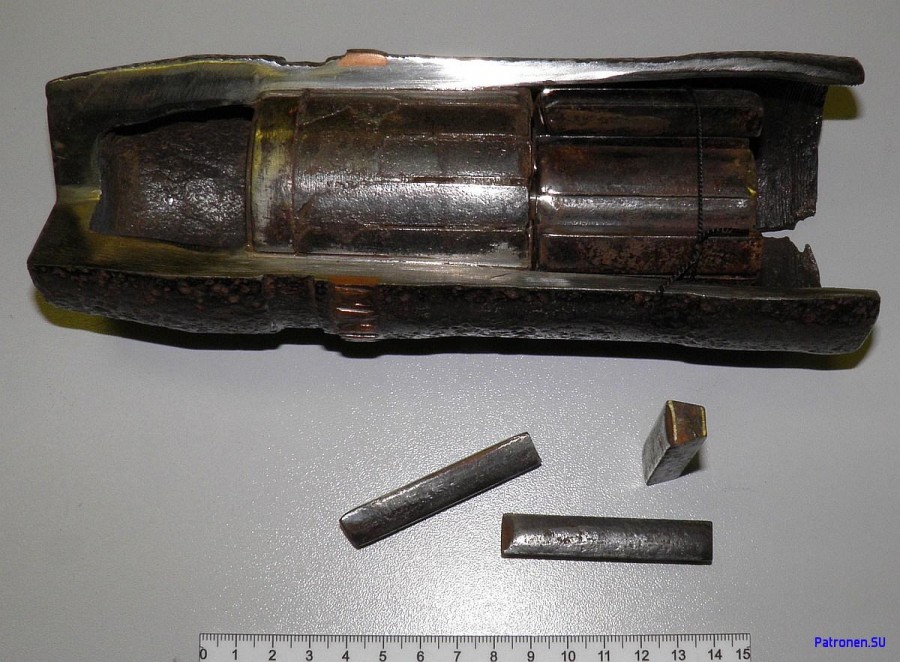 Former Ukranian air force engineer Alexander Luzan writes in his blog that the shape of elements in R-60 and R-27 air-air missiles was similar to elements of older Soviet SAM. Link
“The overlapping sub-projectiles made of wolfram, which is twice heavier than alloy steel. The cut the power wing set, airframes, and engines,” — says the description of the R-60M warhead. Warhead R-60 has nearly 1000 elements of shrapnel each about 3 g.

Judging by the traces of soot and edges of the holes in the skin ot he left side of the cockpit, the explosion occurred in the vicinity of the outside of the aircraft cabin. 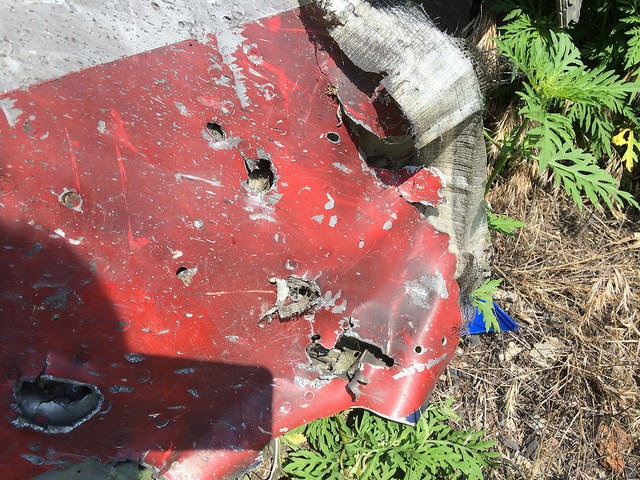 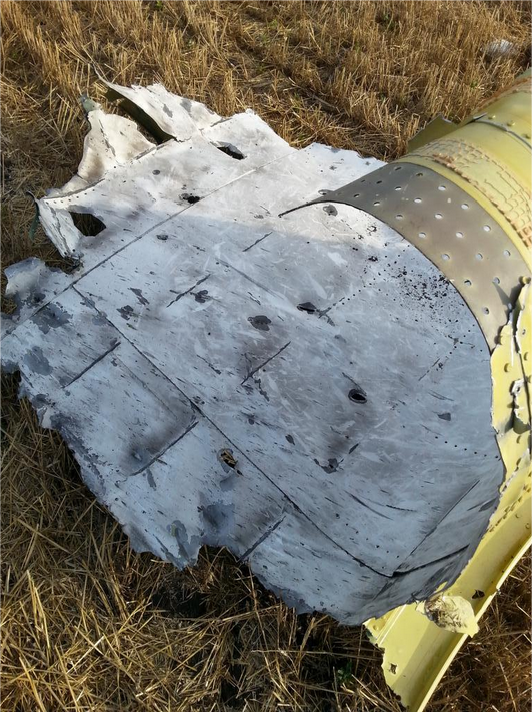 Most of elements exploded on the left side of cockpit: there were about 40-50 holes in the skin of the fuselage and about 50 holes in the floor and the pilot’s seat inside cabin and nose wheel leg.

Various holes in curling of the engine and in horizontal stabilizer.

In the central part of MH17 big holes with size more than 5 cm and diamond holes size more than 10 cm are visible – like in the describtion of newest R-60M missile.

Also we see huge holes near engines in the center of fuselage. 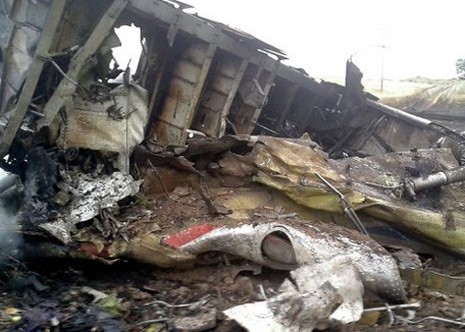 And big holes at tail side of the Boeing 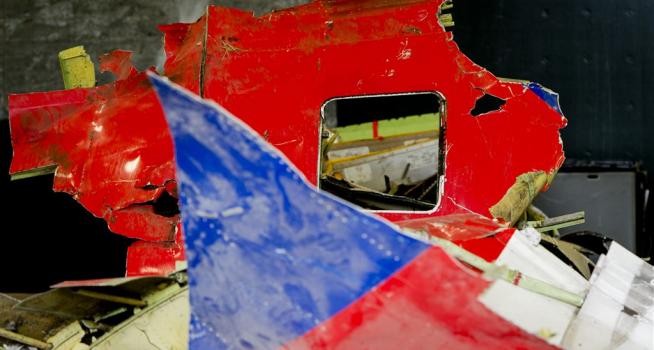 Cuts in the outer skin and inner frames 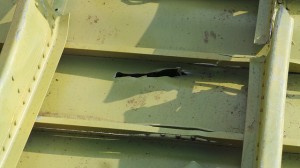 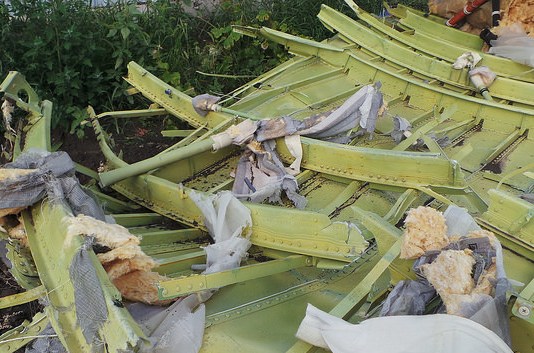 – Holes in the debris of the MH17 cockpit coincide with damages caused by R-60 missile that hit Korean Boeing in 1978 and fit the description of the use of R-60M missiles: huge diamond holes in central parts of the Boeing.

– Evgeny Agapov, mechanic at air base 299 brigade of the Ukrainian Air Force testified that the pilot who shot down MH17 with two missiles R-60 was pilot Vladislav Voloshin flying Su-25M1 (number 06), a modernized Sukhoi 25.

– Two days after MH17 crashed, July 19, captain Voloshin was awarded for courage and heroism although he claims that he was involved in a fight on July 23.