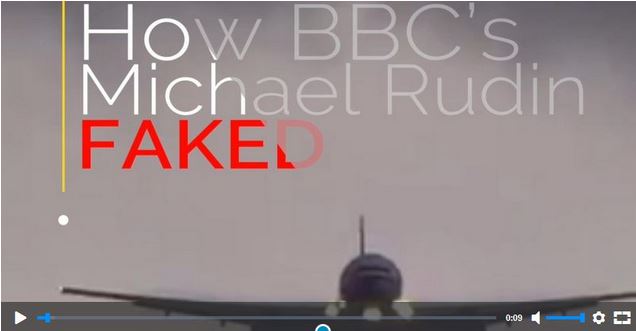 Yana Yerlashova is a Russian documentary filmmaker. She used to work for Russian state TV RT, but recently decided to leave RT and become an independent journalist and that’s when we teamed under the newly founded ‘Bonanza Media’ brand.

Today for the first time Yana speaks about being interviewed and smeared by the BBC in the documentary “BBC The Conspiracy Files – Who Shot Down MH17?”.

Youtube immediately deleted the video under the false pretext of copyright violation. Therefore Bonanza Media had to upload it to Rutube instead. After the video I will dissect what happened exactly.

The BBC documentary was first broadcasted in May 2016 and can still be watched here and here. The producers announced:

When Malaysian Airlines flight MH17 was shot down over Ukraine, killing all 298 passengers and crew, a storm of conspiracy theories was unleashed across social media. While the official inquiries have pointed the finger of blame at separatist fighters and their Russian backers, a host of different theories claim the Ukrainian government, and even the CIA, were to blame.

With revealing eyewitness testimonies, satellite photographs, wire taps, clandestine videos and expert evidence, Conspiracy Files tries to sort the fact from the fiction. In a world where the information war fought online can be just as significant as battles on the ground, this film also analyses the role of the Kremlin in the search for the truth about who shot down MH17. [source]

For this article the relevant fragment lasts about 5 minutes and starts at 25 minutes and 38 seconds of the BBC documentary. To avoid being dragged into copyright law suits and bans from Youtube or Vimeo I have made….

transcripts of the relevant video fragments

The BBC introduces Yana as follows:

“But that didn’t stop the conspriracy theories. Much of the Russian media doubt a ground to air Buk missile was involved at all. Yana Yerlashova says she tried hard to find evidence of a huge missile being launched.”

Yana: “I literally knocked on every door and I said okay, so where is that Buk missile. It was somewhere in your area, you must have heard something. You must have, …you know I did it this reversed psychology or whatever you call this, for people to say honestly what they….but I had no luck.

BBC: “But could someone fire a missile without anyone taking a picture of it? Three hours after the crash two photographs were posted on social media. They are claimed to show the distant plume of smoke from the missile that brought down MH17. The photos were taken by a man from this housing estate 7 miles northwest of Valentina’s village of Red October. But some think the photos are fakes. They say the wires in this photo prove it.”

“the wording I used about the publication of the two photographs was incorrect. One photograph, with the white smoke trail, was posted on social media three hours after the crash, while the other, with the black cables, appeared several months later on RTL nieuws. While I do not think this materially affects the story, I have put a correction on the website.

My comment. Of course this affects the story. If the pictures are forgeries, the cable photo would have been difficult to forge within a time frame of three hours, not so however in case a few months time was given to produce a forgery.

And about Rudin’s ‘correction’:

“But could someone fire a massive missile without anyone taking a picture of it? It turns out that three hours after the crash a photograph was posted on social media.
It claimed to show the distant plume of smoke from the missile that brought down MH17. It’s alleged the photos were taken by a man from a classic Soviet-style housing estate, seven miles north-west of the likely launch site.
The first photograph is one of two images that were posted on social media. We have enhanced the second image so that it easier to see the plume of smoke.” [source]

My comment. This is a strange correction. The two photos in the documentary have become one photo in the BBC article and in the next sentence again plural ‘photos’ is used.

Compare screenshots from the documentary with the pictures in the ‘corrected’ article.

It would have been too humiliating for the BBC to publicly admit it has been corrected by a Kremlin Troll, wouldn’t it? So, of course no credit given.

“But some, including Dutch blogger Max van der Werff who spent time in the area investigating the photographs, think they are fakes. Russia Today’s Yana Erlashova, for one, claims the wires in one of the photos prove it couldn’t have been taken from the photographer’s balcony. She also insists that his ninth-floor balcony didn’t have a view of the launch location.”

The BBC is blatantly lying here. Let’s listen to what Yana really said in the BBC documentary:

Yana: “The wires are on the roof, but he took this picture not from the roof. He took it from his balcony. “

The BBC writes that Yana claims the wires in one of the photos prove it (the picture) couldn’t have been taken from the photographer’s balcony, but she literally says the exact opposite: “…..he took this picture not from the roof. He took it from his balcony. “

Then the BBC introduces Eliot Higgins, who says:

“I totally disagree with that. We have seen images of that side of the building with those cables above the balcony you know, just in the right position to be caught on camera. Those cables are there (inaudible) quite (inaudible) that is visible in the image.”

With which claim issued by Yana does Eliot Higgins “totally disagree”?

That wires are on the roof? Higgins and Yana both claim the photos were taken from the balcony, so that cannot be an issue.

As we saw, the BBC claims: “She [Yana] also insists that his ninth-floor balcony didn’t have a view of the launch location”.

Again, a blatant lie. This is not what Yana said in the documentary at all.
Check:

BBC: “But Yana went to look for herself.”

Yana: “He says that he looked out of the window and he saw the plume. But there is no window in his apartment facing that area.”

Nowhere in the entire 59 minute documentary Yana claims that the balcony didn’t have a view of the launch location!

The BBC uses a drone to film the photographers apartment block, but fails to show the side of the building with the balcony. Why?

BBC: “The photographers balcony is at the back of this block of flats and we discovered that in the distance you can see the launch location near Red October. To the left of the distinctive hill you can clearly see in the photo.”

My comment. BBC uses a strawman here. As we already noticed, Yana never claimed the alleged launch location cannot be seen from the balcony. On the contrary, she explains the picture with the smoke plume was taken from the balcony and thus had the necessary view. Instead, she claimed there is no window with a view at the alleged launch location. Big difference and very misleading reporting by the BBC indeed.

My comment. Technically speaking, even if Yana would have claimed the balcony does not have a view of the launch location, the claim would be true. The devil is in the details here. Although from the balcony the view in the direction of the alleged launch area is visible, the alleged launch area is not because it is obscured by an area in between the apartment building and the site.

A check with Google Earth clearly proves the view is obstructed by a hill at about one third of the distance between the apartment and the alleged launch site:

Also notice the line of trees next to the alleged launch area:

Yana told me the interview took more than an hour, but in the BBC documentary she is only shown to speak about one hundred words. Here the three fragments with her claims listed in chronological order:

“I literally knocked on every door and I said okay, so where is that Buk missile. It was somewhere in your area, you must have heard something. You must have, …you know I did it this reversed psychology or whatever you call this, for people to say honestly what they….but I had no luck.

“The wires are on the roof, but he took this picture not from the roof. He took it from his balcony.“

“He says that he looked out of the window and he saw the plume. But there is no window in his apartment facing that area.”

As demonstrated in this article, and supported by Yana’s footage, all Yana’s claims shown in the documentary are true.

The BBC owes Yana Yerlashova a public apology and has to retract its false claims about her.

This article has the sole purpose to expose the lies disseminated by the BBC about Yana Yerlashova.

For articles about issues with the plume pictures read more here and here.