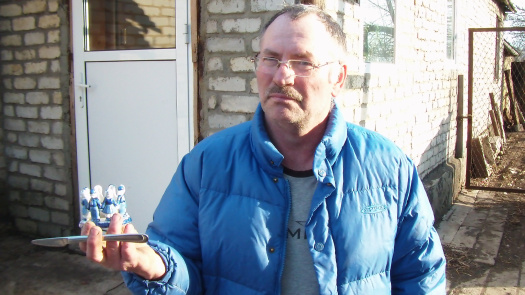 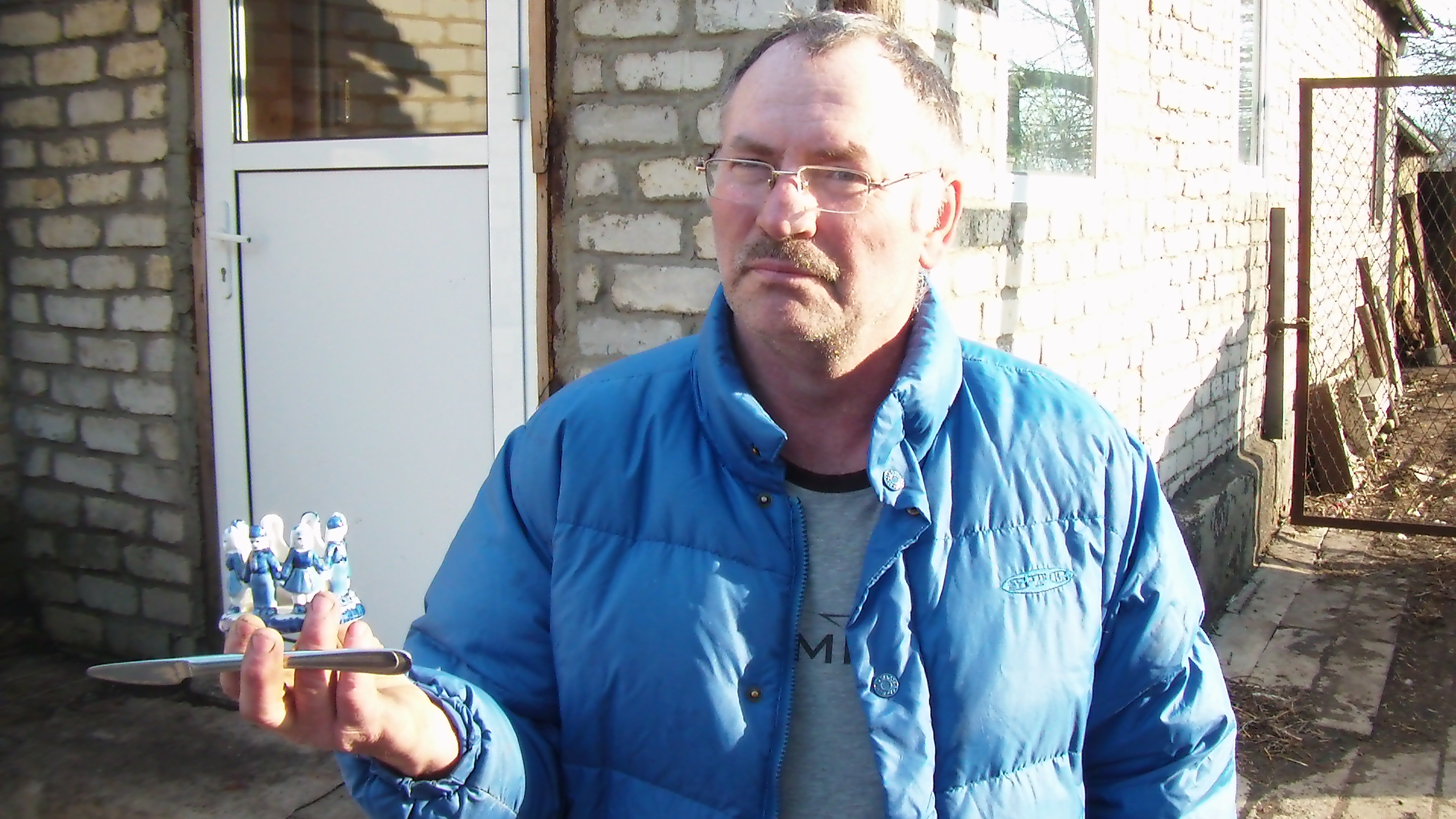 My name is Bulatov Lev Aleksandrovich, a pensioner, former miner.

Max: What is your address?

Lev: Petropavlivka, Komarova street, 1, where we are standing now.

Map below: Petropavlivka is located in the green zone, in the little orange circle not far from the last FDR point. (source: Dutch Safety Board) 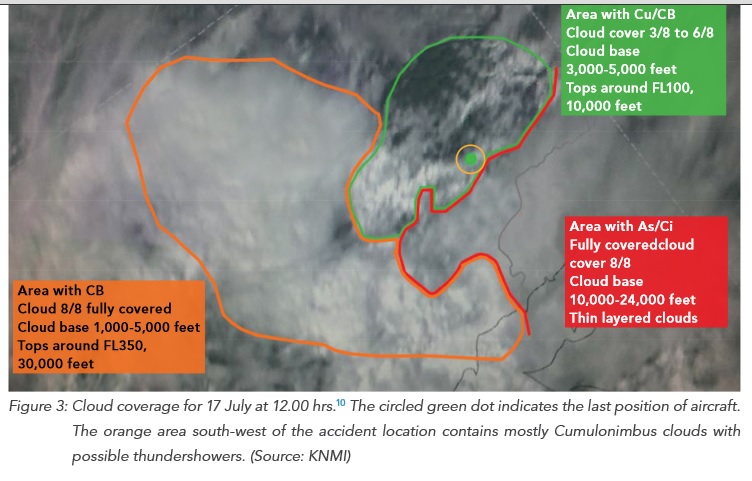 If you don’t speak Russian, no problem. Most Western journalists don’t. They use ‘fixers’. You can watch the original recording from April 17th 2015 and concentrate on Lev’s facial expressions, body language and sounds he makes. Or instead you read the full transcription below and watch the video after.

I testify that I saw with my own eyes how a SU fighter jet attacked Boeing. There were 3 claps. I saw everything from the beginning to the end.

M: Can you show the optics you have please?
L: Using this binoculars, monoculars to be precise, I saw it [the jet] clearly. I could have even remembered its number, but I did not consider this at that moment.

M: And is your monoculars always outside?
L: No, it is always in a place where I can quickly grab it while leaving the house.

M: And so what happened next?
L: The fighting started. I heard SUs flying over the surface, hitting Torez and Shakhtersk. And than I saw… The fighter jets were actually three. And later I saw that one jet sharply accelerated in that direction [pointing with his arm] to the north and went up.

M: How did the sky look? Was it cloudy or sunny? How was the weather?
L: It was very sunny and a bit cloudy. Weakly cloudy, I would say 4 [out of 10] for clouds. Anyway, it is all subjective, but visibility was perfect. I saw the silhouette of this rook (fighter jet) with my monoculars as I can see my own fingers. And when it accelerated, I heard the roar of turbines and it sharply went up. After some time I heard 3 claps:

bah-bah—bah (the last one followed after some time).

M: So you heard 3 claps?
L: Yes, bah-bah—bah, short, exactly as I am saying. The last one after some time. I saw the plane [MH-17] started to crash. But! the central part started falling in that direction [showing with his arm], in the direction of Grabovo. The cockpit was separated, as well as one wing with a turbine and tale. Everything else was intact.

M: So at that moment the plane was already hit?
L: Yes it was hit and there was a loud roar of turbines.

M: So it was hit, but the turbines were still working?
L: Yes, there was a “sad” roar of turbines, I would say “heartbreaking”, really strong roar. And when it [the plane] started to fall and the wrecks were fuzzing already, the plane was falling with back end down. Like this (showing with his arm).

M: How quickly was it falling?
L: Hmmm…. How quickly I cannot say… It was so frustrating, I could not fix the time. Wrecks were fuzzing and the central part fell there (pointing with his arm). I had to dodge from the wrecks, so that they do not fall on my head . Here the hatch fell as I understand. Some blocks fell here, one bounced and broke the window glass. Knifes and teacups fell in the yard. What else… The smell of perfume! The strong smell of expensive perfume… Like Chanel… Very strong smell. I even felt sick of it.

M: May be it was kerosene?
L: Kerosene split there on the trees (shows with his arms). The foliage fell. On the wires as well…

M: Is it North or West?
L: North, exactly North. I was surprised why Boeing changed its usual route a bit.

M: And why?
L: Most likely to be hit later. The flight controllers are deciding on the route… The sky was clear, it was not night. Here [points] – this is the usual international route. When a “Caravel” (Boeing-777) is flying, I can see it very well with the monoculars … 2 turbines… at 10km, 12km… It is seen very well, even the windows. And here I got very surprised – this one [fighter jet] accelerated up and that one [Boeing] was just there.

M: So you were thinking the route is unusual?
L: Yes, very unusual.

M: You never saw it there before?
L: No, never saw a plane going there. Always there, roughly talking, over Shakhtersk. The international route. Hmm… perhaps… No, never saw planes here. Only there [over Shakhtersk]. Of course sometimes they deviate a bit. But here – never.

M: Were there any other civilian airliners or just the Boeing?
L: Before there were some there, as always.

M: How many fighter jets were there?
L: One fighter jet attacked, I saw it with my own eyes.

M: Are you sure it was attacking? Perhaps it was just flying back to its base?
L: Here is Boeing and here is the fighter jet approaching it. So why did the fighter jet go up and attack the Boeing?

M: I am just asking, I do not know anything. Perhaps it was flying back to its base, the rocket was aimed at it, but hit MH17…
L: The rebels do not have this… They only have MANPADS. As I have heard they just have 5km range.

M: Though there are many photos and videos of BUK missile system in Torez and in Donetsk.

L: (laughing) As it is said – if they want to see something, they will see it.

M: There is also a photo of a trail left after the BUK rocket was launched near Snezhnoe…
L: This is just “trep” [talkie-talkie in Russian], if you understand what it means in Russian. Firstly, when the boeing was flying [over this area] I have always been here. If the BUK was launched there would have been a loud roar and a huge trail in the sky. If the rocket was launched either from Torez, here (shows the direction), or Shakhtersk direction, it is not even 99%, 100% I would have seen the trail. Moreover, I am saying it once again it [fighter jet] came and attacked [the Boeing] above. There was nothing else. I saw a fighter jet attacking the Boeing: bah-bah—bah. This is what I saw.

M: So I will repeat it – firstly you saw the jet and then heard the sound.
L: Yes, yes, yes. I saw with my monocular, how it [the fighter jet] was approaching it [the Boeing] and attacked it not reaching it.

M: Was it attacking with bullets or a rocket?
L: I cannot say what it was. Perhaps there were the separate claps or a cannon was working.

M: I do not understand, were there 3 claps?
L: Bah-bah—bah. These I will remember for my whole life. The situation is that there was a fight, here and there were explosions, but this sound I have heard perfectly from here – this bah-bah—bah.

M: So the Boeing was falling. What happened next?
L: So when it started to fall, the fighter jet went to the North, towards Debaltsevo. Then went down. But I did not see it too much, only saw it when it descended. Later I did not see it. It went away and wasn’t hit. These [other 2 fighter jets], I saw them being hit and falling.

M: So what about the other jets?
L: There were 3 in total.

M: 3 fighter jets?
L: There were 3 fighter jets. As I was saying, there was a fight and they were attacking the rebels’ positions, bombing towns and mines.

M: So could you tell me please, where were the other jets going?
L: 2 jets fell. One fell in the direction of Shakhtersk, I was not there, but approximately saw the direction. And the other one somewhere near Torez. This is all approximately, as you understand. Just what I can see with a monoculars.

M: Here in the Netherlands our government thinks it certainly was a BUK. And they are looking for people who saw the BUK in Torez.
L: I heard all of this.

M: And nobody is looking for those who saw the plane. Perhaps they do not believe you?
L: (laughing) As it is said – if they want to see something, they will see it. I was telling them – look, I am a witness, do you think I would not have seen the BUK launch?

M: If the government will ask you to undergo the lie detector test, will you agree?
L: No problems, but I need to travel somehow. Also, I had a heart attack three years ago. If this will not harm my health, I am always ready to confirm my words. This is it.

M: Thank you very much, I need to think about your story.
L: I am ready to swear, I do not believe in God, but I believe in justice. Even taking into account the fear of being killed (the forefront was here [in the summer]),

I was telling and proving what I saw. But nobody wanted to listen.

The French were here, I showed them around.
M: So, the French were here, the Germans were here…
L: Everybody – from Poland, New Zealand, China, again from France, from the Netherlands several times, from Canada – everybody. I have not seen the Malaysians, I would have told them.

M: Thank you very much. 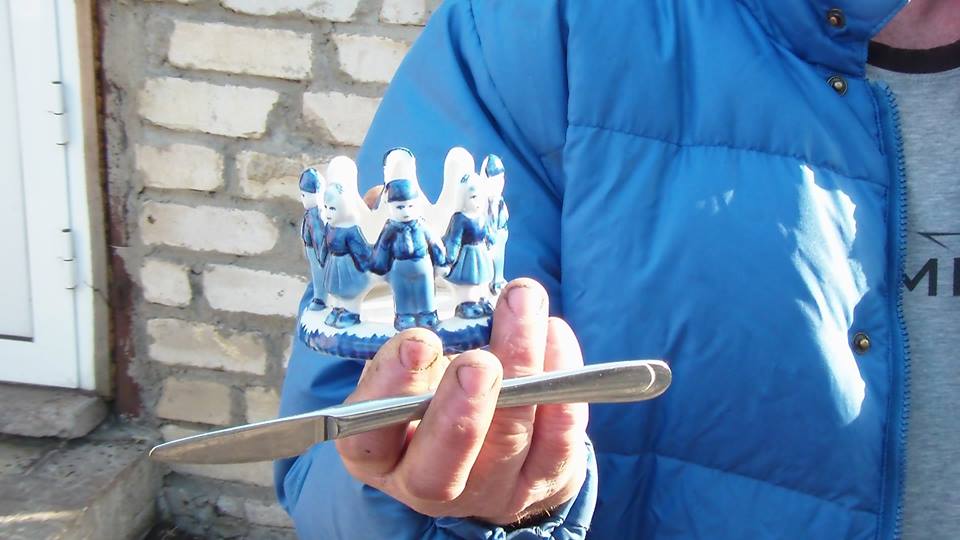 “Maxim, these are for you. As a present. Because you are the first who really wanted to listen to us.”

I felt tears coming. Nine months I spent behind my laptop looking for clues, now, here in the huge crash area things were totally different. I have had dreams one of my…..thoughts went through my head which I will keep to myself. I started crying, crying…….
Two people had come together with me, a curious villager showed up and Lev and his wife……I couldn’t stop the tears…..some people had told me they saw десантики (parachutists), but their chutes never opened.

Later Lev gave me a piece of paper with his telephone number on it. Please call me when all this is over and finally the truth known to everybody.