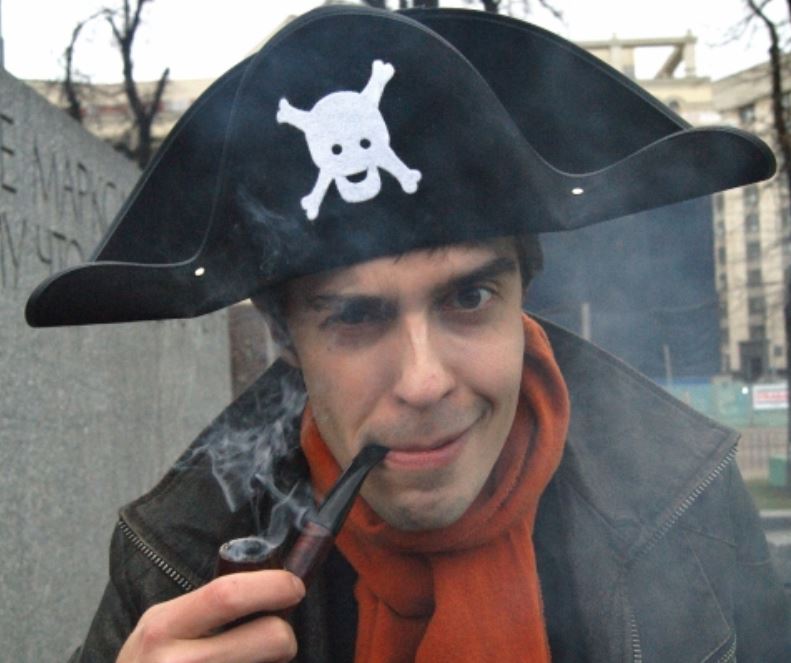 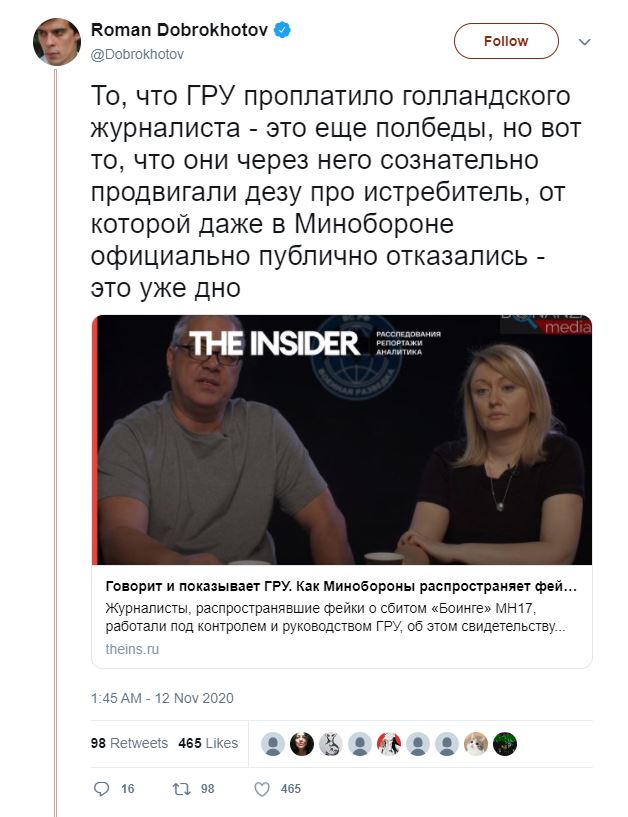 Tweet: “The fact that the GRU paid the Dutch journalist is still half the trouble, but the fact that he deliberately promoted misinformation about the fighter jet,  which even the Russian Ministry of Defense has officially publicly rejected, is a real low.”

The libelous tweet has been deleted, but archived here.

Stalina Valeryevna, please tell us when you started practicing law, how you became a lawyer and whether you have always been a lawyer your entire career.

From about the middle of grade 10, I knew that I would become an investigator. I went to the institute at the law faculty. While I was studying, of course I earned as much as I could and was a shop assistent and an administrator in a beauty salon. But as soon as I graduated from the 3rd course I immediately entered the service of the police. This was in 1999. Inquirer, investigator, head of inquiry … Later I felt cramped within the framework of the orders and I quit. In 2005 I received the status of lawyer and since then I have not been doing anything else, well, except for creative activities.

You represented Anatoly Shariy. Can you tell us what this case was all about?

Mark Feigin publicly accused Anatoly of committing crimes against the sexual integrity of minors. Of course, we went to court and won. Feigin had to refute this information, but he did not calm down and continued to spread lies about Anatoly. We won in court again. Now I am seeking to make Feigin criminally liable for malicious failure to comply with the court decision.

Personal question. Do you know why your parents called you Stalina? Is this really your name? If so, are you happy with your name?

This is really my name and it was the name of my great-great-grandmother’s sister too. It has nothing to do with Joseph Stalin. This Hebrew name means ‘invincibility’. You will represent the interests of Dutch blogger Max van der Werff in a libel suit against Russian journalist Roman Dobrokhotov. What are the merits of this case?

You will represent the interests of Dutch blogger Max van der Werff in a libel suit against Russian journalist Roman Dobrokhotov. What are the merits of this case?

According to Russian jurisprudence the defendant must prove his allegations. Let’s see what Dobrokhotov will do for this. Until now he is obviously delaying the process. In any case, the dissemination of defamatory information is unacceptable and we will demand the refutation.

Your client gave you carte blanche and you issued the indictment on his behalf as well as on behalf of anonymous Russian intelligence officers. Why?

Civil law does not provide for personal liability for defamation. The court only establishes that the disseminated information is inaccurate, defamatory and demands to refute it. There is no punishment for the defendant for deliberate defamation, which is why I chose a double method of protecting my client: protecting his honour and dignity in a civil case and protecting him, as a victim from libel, in a criminal one. Russian legislation provides for such a parallel method of protection in cases of this category.

The plenum of the Supreme Court in this case is expressed absolutely clear: the reliability of the information disseminated must be proved by the defendant, in this case Dobrokhotov. If he cannot present evidence, he is obliged to refute it, regardless of whether he believed in the information being disseminated or knew it was false. This is about a civil case. In a criminal case Dobrokhotov’s awareness of the falsity of the disseminated information must be proved by the investigating authorities. I think such awareness will be established after an expert study of the equipment seized from him.

In addition to the civil lawsuit brought by Max van der Werff, a criminal case based on the civil action has also been filed against The Insider. In this criminal case, Dobrokhotov will be summoned as a witness, not a suspect. Please explain this very confusing situation.

If it is established by investigation that Dobrokhotov deliberately spread a lie, he will be charged.

Excuse me. I was referring to the confusion that Dobrokhotov, called in by you, will be a witness in the lawsuit against The Insider, of which he himself is the founder and owner. How can you expect him to testify against himself? What’s your strategy?

Dobrokhotov will not be a witness against The Insider. He will be personally liable for widespread defamation if it is proved in a criminal case that he is directly involved in the creation and distribution of the text of the article. In principle, his testimony is not needed for this, the conclusion of computer examinations and testimony of witnesses will be enough.

Journalists and commentators in the Netherlands report that Van der Werff is a tool for the Russian authorities. Former Russia correspondent Olaf Koens calls him a “bastard” and:

“Sending Russian disinformation out into the world from your comfortable home in Eindhoven is grim. Doing this at the direction of the Russian special services is malicious. Arresting people in Russia with this … well, what is it? Dirty? It is cowardly, above all, cowardly.”

“In the Netherlands, MH17 blogger Max van der Werff filed a complaint with the Journalism Council against journalist Robert van der Noordaa. In Russia, where there is no independent judiciary, he uses criminal law. “

About the comments of foreign journalists, I can say that after the court’s decision, which I hope will establish that the information disseminated by Dobrokhotov does not correspond to reality, Max will certainly be able to demand a refutation from him of the defamatory information in the jurisdiction of the country where it was disseminated.

Bellingcat and The Insider published an article in which Yana Yerlashova, Max van der Werff and Bonanza Media are mentioned as tools of the Russian intelligence GRU. Both claim that the published data was obtained by a hacker collective called Black Mirror. How plausible is this statement in your opinion?

It is not only implausible, but also threatens Dobrokhotov with criminal liability for collecting information about a person’s private life and illegal access to computer information. Since he cannot but understand this, I am sure that all these statements are nothing more than misleading society in order to explain the published lie.

Bellingcat and The Insider released the names, photographs and other details of the alleged Russian intelligence officers. In most countries of the world, this is a criminal offense. What about Russian laws?

In Russia, the collection and dissemination of information about the life of any person is a crime or an administrative offense, depending on the volume of actions committed. But again, to publish random photos with the words: look, these are undercover agents, this is not the same as publishing photos of undercover agents. I am sure that this article, like all the other joint “investigations” of the Insider and Belingcat, from the truth contain only
conjunctions and prepositions.

It is difficult to comment on other people’s stupidity. With the same token I can say that, judging by the level of effectiveness of the investigations of the foreign journalist he is not a useful, but rather a useless idiot.