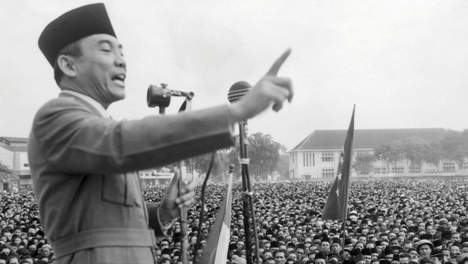 At the beginning of the Indonesian war of independence in 1945 between 3,500 and 30,000 (mostly Indo) Dutch were butchered by violent gangs. Two major Dutch newspapers last week printed the following headline:

‘Murder of thousands of (Indo) Dutch was genocide’

Volkskrant printed this photo of Sukarno straight under the headline

American historian professor William H. Frederick was indirectly quoted and this is what he found useful to explain in public:

“I am afraid things have gotten rather out of hand, with people interpreting my original article in their own way (perhaps without having read it), and misquoting me.
[…]
I should remind readers that a total of 14 deaths was enough to get one Chilean general convicted of genocide (not homicide)
[…]
I am disappointed that the matter has turned into a media circus rather than an opportunity to suggest further research.“

“..no, I do not believe Sukarno and Hatta, and certainly not the wider government, were responsible.”

The complete article of professor Frederick was published in Genocide Journal of September 2012. More than a year ago!

The astonishing gap between the lowest and highest number 3,500 to 30,000 victims during bersiap of course in itself is enough reason to fund further study and nobody in the world other than the professor is better qualified to conduct exactly such a study.

Connected to bersiap, but rather a matter of less urgency for many in the Netherlands is a statement in the same Genocide Journal by Remco Raben:

“Strangely enough, no attempt has been made to calculate the loss of Indonesian lives over the long course of Dutch intrusion in the archipelago. The list of Dutch colonial atrocities and excessive violence is long. From the ﬁrst conquests of the Dutch East India Company to the violent endgame in Indonesia, Dutch armies and their auxiliaries have perpetrated acts of extreme violence by murder, terror, raiding, displacement and starvation of indigenous peoples. The death toll of these acts of violence, extermination and willful neglect must be calculated into numbers between 600,000 and one million. This is an outrageously imprecise approximation, handicapped as the effort is by the lack of adequate data, and the complexities of the causes of deaths.”

It is late, but not too late to make a study of the complete decolonisation process of the Dutch Indies. All violence from all participants should be researched and what it meant for the victims of various ethnic and political groups should be minutely described. Mr. Frederick’s distorted words underline the importance of having the study supervised by international and reputable historians. There will be unpleasant conclusions for almost all stakeholders, but that should no longer be the hidden reason why such a study was never undertaken in the first place.

Due to copyright issues it unfortunately is not possible to post the entire Genocide Journal September issue (232 pages) online. It is available in the Koninklijke Bibliotheek for study purposes.